Meet the Michael Myers of Typography: Trajan (It never dies) While this typeface doesn’t have an origin story linking it to the macabre, it certainly has made a name for itself: Horror movie posters, and a lot of them.

Trajan was designed in 1989 by Carol Twombly referencing rubbings from the inscription on the base of Trajan’s Column in Rome, Italy. She specifically created it for the company Adobe, which creates many of the design software that graphic designers use every day. It has been used for a wide variety of movie genres over the years from The Last Samurai to Titanic, but today it is known as the notoriously overused typeface of the horror movie genre.

So while you’re sitting at home binge-watching horror movies, keep an eye out. Trajan could be lurking just around the corner. 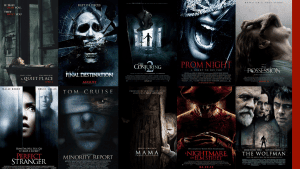 And it seems Trajan isn’t alone, as of a few days ago it has new tongue-in-cheek-horror-flick-font competition with the release of “Hellvetica” (dubbed by Fast Company as Helvetica’s evil twin).